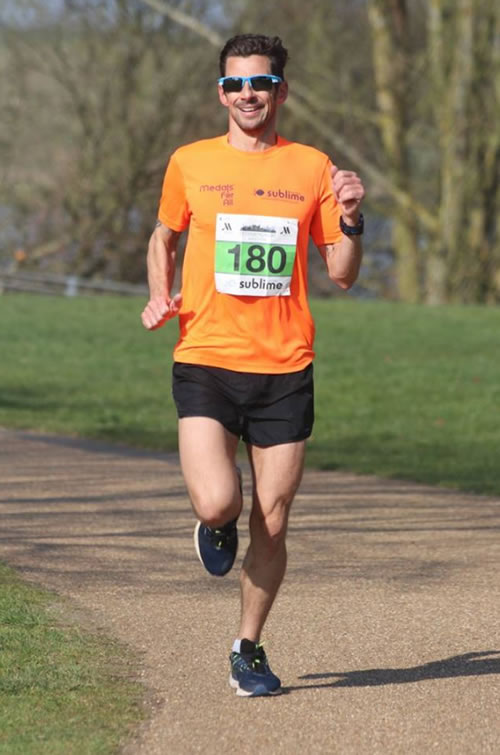 I was fortunate enough to be given the opportunity by Sublime Racing to incorporate my training run in the first part of the inaugural Sublime Peterborough Marathon, which was from the start line finishing at the water Station just past the Millennium bridge which meant I covered 14 miles of the marathon course.

I was collected by a fellow athlete who was competing in the entire marathon, he had collected his race pack days before from Advanced Performance, so already had his race number and timing chip affixed to his racing apparel.

As soon as we turned into Lynch Wood, our anticipation heightened as we saw the large sublime Inflatable pontoon arch. We were greeted by a happy Race Maker who directed us to the ample sized carpark that was only a small walk away from the Race HQ, as soon as we got out of the car there was a fantastic atmosphere with motivating music booming from the PA system next to the start line.

Race HQ, where do I begin, this must be the plushest race HQ I have ever been to, a mixture of Hotel Staff and Race Makers were on hand to direct us in the right direction upon our arrival. There was a throng of activity and a buzz amongst the other runners, those runners getting into the zone were doing so in luxury armchairs. I was collecting my race number on the day, which took a grand total of 10 seconds.

Although, I was only treating it as a training run, the nerves still kicked in and I needed to use the facilities, instead of the portable loos I and other runners are used to, we were treated to luxurious toilets with hand soap and hand cream.

The bag drop was clearly marked and again took a matter of seconds, again greeted by an extremely cheerful race maker (Jane).

Within the main congregation area there was a large screen with a countdown timer clearly displayed again adding to the anticipation and making sure there was no excuse for missing the start.

The location was ideal for completing warms ups as long or as short as was required, there was also ample space to complete the last-minute strides, and there were several toilets close to the start area for those like myself that suffer with last minute nerves.

There was also a Master of Ceremonies on the PA, a voice everyone would recognise if they have ever done the GER, he did a fantastic job of adding even further kudos to the event.

The Race Director welcomed everyone to the event and gave a perfect safety briefing, which was informative and perfectly delivered.

I took the opportunity to start the race from the back of the field with one of my local running hero’s, Eamon Dorling. It was fantastic to hear the MC name checking Eamonn and detailing Eammon’s running pedigree.

The Marathon had started, the racing snakes at the front of the race had showed their intent and went out hard. I took my time to start with, taking in the course and the atmosphere. The first thing that got me was the amount of spectators that had made their way out onto the course to give their support.

I had my reservations when I’d been looking at the course leading up to the event, but these were soon quashed. I had run so many times around Ferry Meadows and on the Green Wheel either in races or training runs and was worried that I would find it boring. This couldn’t have been further from the truth.

The course had such a different feel to it than that of running a park run or doing a training run, the other Park users appeared to embrace the event and took time to stop and cheer the runners on, there were several children that took time to make banners which really added to the occasion.

The course had ample Race Maker Marshals, they were amazing, it was like they had been to Race Maker school, the support they gave was constructive and felt specific to me as an individual, many were dancing’s and waving oozing motivation and happiness.

I was spoilt as many of the Race Makers were from local clubs and I was treated to hearing my name shouted out on many occasions during my 14-mile stint, I did feel like a bit of the fraud as they weren’t aware that I wasn’t running the full distance.

The course was well laid out, with a copious amount of signage and Marshals so there was no risk of going in the wrong direction, the course was scenic and beautiful.

However as the Marathon grows which I have no doubt that it will, a large amount of the current course won’t be big enough to accommodate the large numbers. Also, as this race entices even faster runners than the mighty “Ty Farrer” and in a larger numbers, I think the twist and turns of the current course could present problems in the future and hinder the super quick times which I know every major City Marathon aspires to achieve.

Unfortunately, I didn’t get back to the Race HQ to enjoy the Prize Giving and the after race party, but I heard hugely positive things from those that did.

To summarise, this race was amazing, every minor detail had been thought about, it was obvious to see that this event was organised by runners for runners of all abilities and the part that I experienced was simply “sublime”.